All about Anna Peszko

I first started playing piano when I was six years old. My grandmother was a wonderful singer and I developed a decent singing voice under her tuition. Whenever I heard the piano on the radio or TV I used to sit at the table pretending I had my own piano and I was playing the song being broadcast. Little did I know at the time that this young girl’s dream would become my passion and lead me into the career I have today.

My grandmother’s brother was a violinist so I think music is in my genes. Grandma suggested that my mother should take me to the local music school and the rest, as they say, is history. Upon enrolment, I chose piano as my preferred instrument.

I later studied at the Middle School “Lyceum of Music” in Wroclaw, under the tutelage of Professor E. Nawarecka. I graduated from The Karol Lipinski Academy of Music in Wroclaw (Poland) with a “Superior Degree and Master’s in Piano Instrumental Pedagogy” under Professor W. Witkowski. As part of my studies I attended a Piano Master Class by the world-famous pianists Victor Merzhanov and Grigory Sokolov.

Like most students, while studying I worked to support my education. I worked as an accompanying pianist at the Theater of the Operetta in Wroclaw and as a Teacher in the Elementary & Middle Grade Piano schools in the cities of Wroclaw and Olesno.

In 1993, I moved to Spain where I continued my musical career performing numerous solo and chamber concerts, singing in the Choir of the Opera in Malaga and teaching at the Municipal School of Music in Almuñécar until the Year 2000.

On two occasions, I travelled with my students who studied a Musical Master Class in Duszniki Zdrój (Poland), a small town which is famous for the Summer Chopin Music Festival.

In 2001, I moved to Ronda to work as a piano teacher at the “Municipal School of Music” in the city where I prepared students to access Professional Education and they invariably obtained the best qualifications in the provinces of Malaga and Granada.

In 2017 I moved to the UK and started teaching pupils form the local area.

My academic life has been spent pursuing my dream of becoming a fantastic piano player and, in the later years, teaching others who have a similar love of the piano. I have been teaching students to play the piano since 1983 in both Poland and Spain and I am now teaching in my piano studio in Middlesbrough for pupils in Middlesbrough, Stockton on Tees, Yarm, Redcar and the surrounding Teesside area. 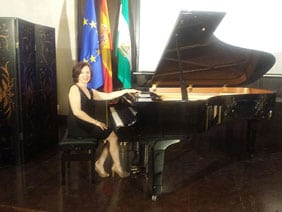 What can I teach you?

Playing solo is a fun and beautiful experience. You will learn-

Learn to accompany other instruments

The piano is an extremely popular accompanying instrument. You will learn-

All aspects of Solfege (solfeggio or music theory) are taught. You will learn-

You’re never too young or too old to learn the piano. I have taught students from the age of 4 up to students in their 70s.